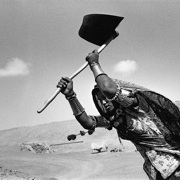 Then and Now: Photographs by Sebastião Salgado

“Then and Now” was the inaugural exhibition in the Brower Center’s Hazel Wolf Gallery from May 2009 through January 2010.

This exhibition presented a selection of images spanning a career in documentary photography by renowned Brazilian photographer Sebastião Salgado.  His images tell the story of an era, tracing the human and environmental impacts of modern industrial civilization through the lives of workers, the rural poor and the displaced. These powerful photographs were selected from Salgado’s long term projects: Other Americas, Sahel, the End of the Road, Workers, Migrationsand Africa.  Also on view were select images from his “work in progress,” Genesis, which began in 2004 and will be completed in 2011. These images reveal nature – landscapes, flora, fauna and human settlements – in its earliest state.

In his native country, Sebastião and his wife Lélia work together on an environmental restoration project called Instituto Terra in Brazil. The project’s mission is to restore a portion of Brazil’s Atlantic forest, raise environmental awareness, and work on small economic development projects benefiting the communities living in that high biodiversity area.

Sebastião Salgado’s work – both as a photographer and as an activist – exemplifies art’s potential to inspire action.