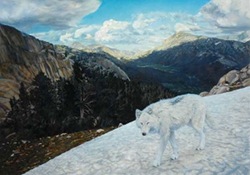 The David Brower Center believes that art has unique transformative power, especially when placed in the service of activism. As art critic Lucy Lippard says, such art “cares about, challenges, involves, and consults the audience for whom it is made, respecting community and environment … and is engaged with its audience in articulating a differently understood past, an alternate present, or a set of possible futures.”

Every autumn, the David Brower Center’s Hazel Wolf Gallery presents the Art/ Act Exhibition, an honor awarded to an artist who achieves a transformative convergence of art and activism. In 2012, the Art/Act honor is for artist, scientist, and pioneer of historical ecology Laura Cunningham. This exhibition aims to highlight the analytical and observational side of science while revealing the artistic beauty in scientific illustration.

This is Cunningham’s first solo exhibition, highlighting the cross-disciplinary nature of her work as a naturalist and artist. Featuring striking illustrations of Californian landscapes as they would have looked centuries ago and contemporary photographs of the same landscapes, the exhibit showcases the dramatic impact that human activity has had on California’s landscapes. Following a long tradition of naturalists who want us to see and understand the world as they see it, Cunningham envisioned these landscapes through tireless field research and many years spent scouring historical accounts, paleontological findings, and archaeological data. The exhibit also features large-scale sketch murals of local species, ecosystems, and ecological processes, and watercolors of native plants and animals.

Laura Cunningham is an artist-naturalist who has worked in the field of wildlife biology. Trained in paleontology at the University of California at Berkeley and in natural science illustration at UC Santa Cruz, she has been a scientific illustrator for the Museum of Paleontology at University of California, Berkeley and illustrated fossil invertebrates for the Smithsonian Institution, Washington, D.C. She has brought her unique skills to a diverse set of scientific projects, for example working with the United States Geological Survey Biological Resource Division analyzing amphibian declines in the Sierra Nevada and amassing species inventories in Death Valley National Park. She has also produced mural exhibits for museums and other institutions, and her work has been shown at numerous art shows and museums around the United States.

We are grateful to Tom Steyer and Kat Taylor for their generous support of this exhibition.