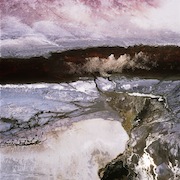 In 2001, David Maisel photographed at Owens Lake, once a 200-square-mile lake on the eastern side of the Sierra Nevada in California. The resulting Lake Project offers stunning aerial images of a fertile valley transformed into an arid stretch of land.

Beginning in 1913, the Owens River was diverted to bring water to Los Angeles. By 1926, the depleted lake exposed vast mineral flats, and the lakebed soon became the highest source of particulate matter pollution in the U.S., emitting some 300,000 tons of carcinogens annually. Blooms of bacterial organisms emerged from the little water that remained, turning it a deep red. Viewed from the air, vestiges of the lake appear as a river of blood, a bisected vein, or a galaxy’s map.

As a stunning work of both art and advocacy, The Lake Project helped to contribute to public awareness and mitigation efforts over the last nine years.

Learn more about Owens Lake and the impact of our water management choices by connecting with any of the following organizations: